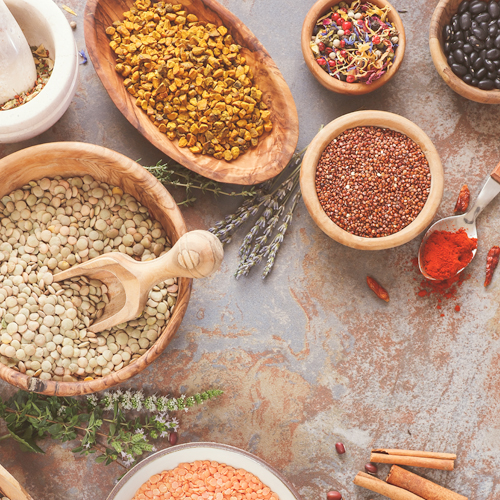 A grain, a green, a cultural icon, a religious symbol… amaranth is colorful plant with a colorful history. It’s also nutritious. Amaranth was a staple of pre-Colombian Aztecs, who imbued it with supernatural powers and made it part of their religious ceremonies.

Amaranth today is enjoyed many ways. In Mexico and India the seeds are popped and mixed with sugar to make a confection. In Mexico they are roasted for the traditional drink “atole.” Peruvians use the grain to make a beer. Elsewhere it’s used to  treat toothache and fevers or to color maize and quinoa. Women performing native dances often wear the red amaranth flower as rouge. In many countries the leaves are used boiled or fried. In Nepal the seeds are made in to a gruel. Although amaranth seed and flour can be found in health food stores, if you want the greens you have to grow it yourself, or forage for it in season, which fortunately is long.

It’s a bushy plant growing 3 to 10 feet, depending if it’s wild or cultivated, a vegetable variety or a grain variety. Feral versions are green, sometimes with red stems, spindly and usually no more than two feet, rarely three. Cultivated versions can be all red, or all green, showy or dull. Grain varieties can be six or seven feet tall. The lens-shaped seeds are tiny — eye of a needle size — and can be gold to black. Plants produce on average 50,000 seeds each. If you have a calculator, that’s a line of 1/32-of-an-inch seeds 130 feet long. Amaranth will grow under a variety of conditions and climates. I always have some in my garden every year though I have not intentionally planted it for more than seven years. It reseeds itself, and if it sprouts where it’s convenient for me, I let it grow. While the grain is very nutritional and versatile I use amaranth mostly for a summer green because it is among the few plants that can take Florida’s high heat and humidity. It has no significant pests per se. Its leave are nutritionally on par with spinach, which is a relative. Also if you avoid spinach for health reasons you should avoid amaranth.

Amaranth seed is high in protein, some 16%, contains lysine and methionine, two essential amino acids that are not often found in grain,  and is high in fiber, three times that of wheat. It also has calcium, iron, potassium, phosphorus, vitamins A, C and E.

Spiny amaranth has edible leaves and might be a medicine and sex aid.

There are some 60 amaranth species, maybe 70 (it depends on who’s counting.)  The botanical genus name,Amaranthus, (am-a-RANTH-us) comes from the Greek word “amarandos, (Αμάραντος) which means non-fading, since its flowers last a long time.  Modern Greeks call it Vlita (VLEE-tah.) I see four kinds of amaranth sporadically here in Florida,  one I’m sure is an imported version from up north, probably A. viridis (VEER-ih-diss, green, often with notches at the end of the leaf. ) Another is A. hybridus. (hib-RID-us or HYE-brid0-us, also called Smooth Amaranth, with trowel-shaped leave if not pointed.)  A third is A. spinosus (spin-OH-sus, spiny.) The leaves and seeds of all three are edible. However, with the latter, the Spiny Amaranth, you have to fight the spines for them. But, the Spiny Amaranth has a very positive side. An article published 23 Aug 2007, in the Journal of Natural Medicines, reported an extract of the plant in rats  “exhibited control of blood glucose… showed significant anti-hyperlipidemic … effects….”  and increased sperm count and weight of their sex organs. That should make the spiny amaranth disappear as a road side weed.

The fourth amaranth was a bit of a mystery for a while.  A new bridge was build over the St. Johns River near Sanford and sod brought in for landscaping. Along with the sod came a big amaranth that I took home and transplanted just to see what it would be. Time revealed it to be Amaranthus australis, also called Hemp Amaranth and Southern Amaranth. Oddly it is the only amaranth I have run into that I can’t find an ethnobotanical reference to. It is native, and huge, 15 feet tall is common. Surely it would have been used if usable. But, search as I may I’ve not come up with much about it. It’s not even mentioned in the 70 year index of the Journal of Economic Botany.  I have read there are no poisonous amaranths but it is curious that such a large and obvious plant has left not usage trail. My friend Andy Firk down in Arcadia, Florida, reports he eats all the time with no problems. It’s absence from ethnobotanical records and foraging books is a mystery to me.

As with most plants used for “greens” young and tender leaves are usually best, take them from the top. Leave the older, larger leaves to collect energy for the plant. If you want to collect the seeds after they form, take a large, non-porous bag, put it over the top of the plant, gently tip the plant to the side, and shake. The seeds will come loose. What bugs you might get is free protein. Then winnow because you’ll get some seed heads and flower debris.

As for cooking the leaves, I use them like mustard greens, boiling them for 10 minutes or so and then season with salt, pepper, and butter, or with some olive oil and vinegar. After boiling, the leaves can be added to various dishes that call for spinach. But do know that if amaranth is fertilized heavily or grows in drought conditions it can hold a lot of nitrates.  If you are going to eat amaranth seeds soak them over night in water to reduce their saponin content.

Simmer amaranth in an equal volume of water for 12-15 minutes. Allow to cool. Place all ingredients except lettuce and olives in a mixing bowl and toss together lightly. Chill for an hour or more to allow flavors to blend. Wash and dry lettuce leaves and use them to line a salad bowl.  Put the amaranth “tabouli” on the lettuce and garnish with olives.

TIME OF YEAR: Spring in to summer for the leaves, summer or fall for seeds, depending upon the climate.

ENVIRONMENT: Full sun, rich to poor soil, as long as moisture is available. Found around and in gardens, stops signs, vacant lots, an opportunist. Will not grow in shade. Found throughout most of of the Americas. Has spread around the world. If harvested in fertilized area or in drought the amaranth can be high in nitrogen.

METHOD OF PREPARATION: Tender young leaves raw in salads, or cooked like spinach. Seeds eaten raw or ground into flour. There are no poisonous amaranths.

Herbalists say a decoction of Amaranth has been used for inflammation of the gums and as a wash for external wounds. Also internally as a treatment for diarrhea and dysentery