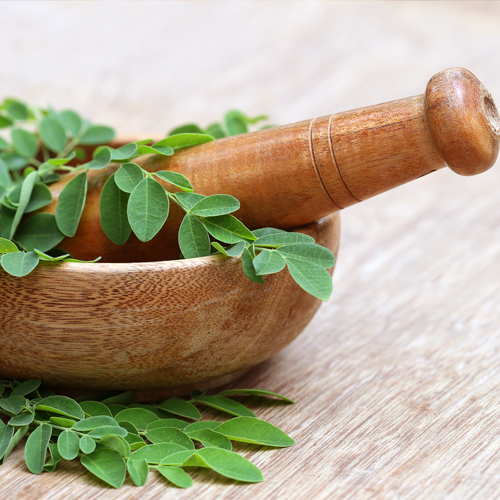 Moringa oleifera is a fast-growing tree native to South Asia and now found throughout the tropics. Its leaves have been used as part of traditional medicine for centuries, and the Ayurvedic system of medicine associates it with the cure or prevention of about 300 diseases.1

Moringa, sometimes described as the “miracle tree,” “drumstick tree,” or “horseradish tree,” has small, rounded leaves that are packed with an incredible amount of nutrition: protein, calcium, beta carotene, vitamin C, potassium… you name it, moringa’s got it. No wonder it’s been used medicinally (and as a food source) for at least 4,000 years.2

The fact that moringa grows rapidly and easily makes it especially appealing for impoverished areas, and it’s been used successfully for boosting nutritional intake in Malawi, Senegal, and India. In these areas, moringa may be the most nutritious food locally available, and it can be harvested year-round.3

Personally, I grew a moringa tree for two years and I can attest to the fact that it grows like a weed. For those living in third-world countries, it may very well prove to be a valuable source of nutrition.

However I don’t recommend planting one in your backyard for health purposes as the leaves are very small and it is a timely and exceedingly tedious task to harvest the leaves from the stem to eat them.

The leaves are tiny and difficult to harvest and use, so you’ll likely find, as I did, that growing one is more trouble than it’s worth. That being said, there is no denying that moringa offers an impressive nutritional profile that makes it appealing once it isharvested…

6 Reasons Why Moringa Is Being Hailed as a Superfood

Moringa leaves are rich in antioxidants, including vitamin C, beta-carotene, quercetin, and chlorogenic acid. The latter, chlorogenic acid, has been shown to slow cells’ absorption of sugar and animal studies have found it to lower blood sugar levels. As noted in the Asian Pacific Journal of Cancer Prevention:5

“The leaves of the Moringa oleifera tree have been reported to demonstrate antioxidant activity due to its high amount of polyphenols.

Moringa appears to have anti-diabetic effects,7 likely due to beneficial plant compounds contained in the leaves, including isothiocyanates. One study found women who took seven grams of moringa leaf powder daily for three months reduced their fasting blood sugar levels by 13.5 percent. 8

Separate research revealed that adding 50 grams of moringa leaves to a meal reduced the rise in blood sugar by 21 percent among diabetic patients.9

The isothiocyanates, flavonoids, and phenolic acids in moringa leaves, pods, and seeds also have anti-inflammatory properties. According to the Epoch Times:10

“The tree’s strong anti-inflammatory action is traditionally used to treat stomach ulcers. Moringa oil (sometimes called Ben oil) has been shown to protect the liver from chronic inflammation. The oil is unique in that, unlike most vegetable oils, moringa resists rancidity.

This quality makes it a good preservative for foods that can spoil quickly. This sweet oil is used for both frying or in a salad dressing. It is also used topically to treat antifungal problems, arthritis, and is an excellent skin moisturizer.”

… In hypercholesterol-fed rabbits, at 12 weeks of treatment, it significantly (P<0.05) lowered the cholesterol levels and reduced the atherosclerotic plaque formation to about 50 and 86%, respectively. These effects were at degrees comparable to those of simvastatin.

… The results indicate that this plant possesses antioxidant, hypolipidaemic, and antiatherosclerotic activities, and has therapeutic potential for the prevention of cardiovascular diseases.”

The leaves and seeds of moringa may protect against some of the effects ofarsenic toxicity, which is especially important in light of news that common staple foods, such as rice, may be contaminated.13 Contamination of ground water by arsenic has also become a cause of global public health concern, and one study revealed: 14

These changes were accompanied by approximately 57%, 64%, and 17% decrease in blood ROS [reactive oxygen species], liver metallothionein (MT), and lipid peroxidation respectively in animal co-administered with M. oleifera and arsenic.

Another interesting observation has been the reduced uptake of arsenic in soft tissues (55% in blood, 65% in liver, 54% in kidneys, and 34% in brain) following administration of M. oleifera seed powder (particularly at the dose of 500 mg/kg).

Moringa Leaves May Even Purify Water… and More

From a digestive standpoint, moringa is high in fiber that, as the Epoch Times put it, “works like a mop in your intestines… to clean up any of that extra grunge left over from a greasy diet.”15 Also noteworthy are its isothiocyanates, which have anti-bacterial properties that may help to rid your body of H. pylori, a bacteria implicated in gastritis, ulcers, and gastric cancer. Moringa seeds have even been found to work better for water purification than many of the conventional synthetic materials in use today.

According to Uppsala University:16

“A protein in the seeds binds to impurities causing them to aggregate so that the clusters can be separated from the water. The study… published in the journal Colloids and Surfaces A takes a step towards optimization of the water purification process.17

Researchers in Uppsala together with colleagues from Lund as well as Namibia, Botswana, France, and the USA have studied the microscopic structure of aggregates formed with the protein.

The results show that the clusters of material (flocs) that are produced with the protein are much more tightly packed than those formed with conventional flocculating agents. This is better for water purification as such flocs are more easily separated.”

There is speculation that moringa’s ability to attach itself to harmful materials may also happen in the body, making moringa a potential detoxification tool.

How to Use Moringa

If you have access to a moringa tree, you can use the fresh leaves in your meals; they have a flavor similar to a radish. Toss them like a salad, blend them into smoothies, or steam them like spinach. Another option is to use moringa powder, either in supplement form or added to smoothies, soups, and other foods for extra nutrition. Moringa powder has a distinctive “green” flavor, so you may want to start out slowly when adding it to your meals.

You can also use organic, cold-pressed moringa oil (or ben oil), although it’s expensive (about 15 times more than olive oil).18 As mentioned, while I don’t necessarily recommend planting a moringa tree in your backyard (a rapid-growing tree can grow to 15 to 30 feet in just a few years), you may want to give the leaves or powder a try if you come across some at your local health food market. As reported by Fox News, this is one plant food that displays not just one or two but numerous potential healing powers:19

“Virtually all parts of the plant are used to treat inflammation, infectious disorders, and various problems of the cardiovascular and digestive organs, while improving liver function and enhancing milk flow in nursing mothers. The uses of moringa are well documented in both the Ayurvedic and Unani systems of traditional medicine, among the most ancient healing systems in the world.

Moringa is rich in a variety of health-enhancing compounds, including moringine, moringinine, the potent antioxidants quercetin, kaempferol, rhamnetin, and various polyphenols. The leaves seem to be getting the most market attention, notably for their use in reducing high blood pressure, eliminating water weight, and lowering cholesterol.