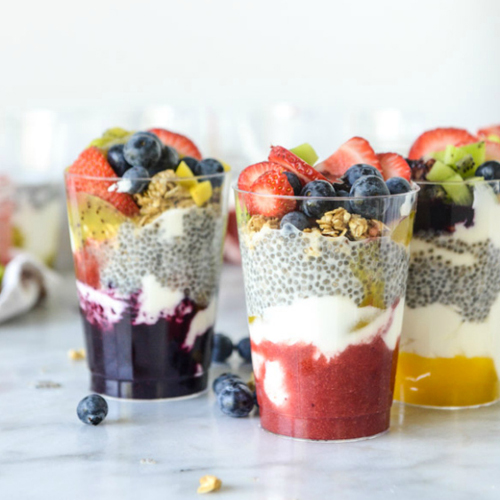 Back-to-school time can be so disorienting. It’s like you’re still wearing flip-flops and sundresses, while mentally shopping for cozy flannels, jeans and booties. And the morning rush? The struggle is real, my friends. What’s needed are some ingenious hacks that make easing into the school year as simple as transitioning summer clothes into fall. And the place to start is at the top of your morning, with breakfast.

Just because you don’t have time for a weekend-worthy short stack doesn’t mean you have to leave the house with a rumble in your tummy. Here are 18 make-ahead breakfasts that will save the day.

1. Freezer Smoothie Packs: Smoothies can be a quick and healthy breakfast, but the clean and prep is a real time suck. Solution: Prep a week’s worth of fruit and veggie freezer packs ahead of time. Now you can just pop a single serving into the blender, add milk and go. Pro-tip: Toss a couple of almond or coconut milk ice cubes in your packs and you’ll never be out of milk. (via Dessert Now, Dinner Later)

2. Rainbow Syrup Bottomed Chia Pudding Parfaits: If make-ahead is too boring for you, eating the same old thing every day, this recipe will let you taste the rainbow all week. And aren’t these parfaits sweet? It’s like you put your Lisa Frank Trapper Keeper in a blender — um, but you didn’t, because you had a nutritious breakfast, so you’re super-alert now and ready to face the world. (via How Sweet It Is)

3. Homemade Toaster Strudels: Back to school time is *so* throwback, so what’s more appropriate than this homemade version of the childhood favorite that got you through the morning rush? These toaster pastries are just as convenient as they ever were, but so much more delicious and healthy. (via Cooking Classy)

4. Pumpkin Spice Latte Overnight Oats: No time for a Starbucks stop? No problemo! You can get your fall PSL fix with these pumpkin-pie spiced overnight oats. This is one healthy breakfast that will keep you going strong until lunchtime. (via Cupcakes & Kale Chips)

5. Chorizo Tater Tot Casserole: If it’s just not breakfast unless there are hashies on the menu, you are going to love this tater tot casserole. It’s quick, easy to make and can be prepped ahead the night before. (via Life’s Ambrosia)

6. Homemade Frosted Brown Sugar Cinnamon Pop-Tarts: If brown sugar cinnamon was your fave Pop-Tart flavor, you’re going to flip for these scratch-made versions. Make a big batch ahead of the week, then you can just pop ’em in the toaster as needed. (via Sally’s Baking Addiction)

7. Cinnamon Roll Overnight Oats: This one’s for the cinnamon lovers with a grown-up palate. These quick and easy overnight oats have all the brown sugar goodness of a cinnamon roll, but with a healthy twist. (via Creme De La Crumb)

8. Slow Cooker Southwestern Breakfast Burritos: When it comes to convenience meals, break out the slow cooker. You can prep these babies the night before, set it and forget it. You’ll wake up to the smell of delicious Southwest burritos that are ready to eat when you are. (via Delicious Knowledge)

9. Pumpkin Pie Smoothie Bowl: If you love smoothies, but they smack of summer food, you are going to love this thickened oat-y version served up in a bowl. And the pumpkin pie spices smell so cozy and divine. (via Hummusapien)

10. Slow Cooker Cinnamon Rolls: When only the real thing will do, you can have your home-baked cinnamon roll and eat it too, even on your busiest morning. This dough calls for just five ingredients and needs only 30 minutes to rise before you roll ’em up and stick them in the crock pot. Bonus: The wondrous smell of baking cinnamon will wake you before your alarm. (via Creme De La Crumb)

11. Peanut Butter and Jelly Chia Pudding: If you’re a PB&J fan, this chia pudding is for you. It’s made of steel cut oats, peanut butter, toasted almonds and blueberry compote, and the taste is *absolutely* to die for. (via Minimalist Baker)

12. French Toast Bake: If you crave French toast and maple syrup in the morning, this baked version is the hack you’ve been looking for all your life. It tastes like French toast and cinnamon rolls combined into one amazing breakfast cake, but you can prep it the night before and it bakes in one pan in the time it takes you to shower. (via Life In The Lofthouse)

13. Healthy Peanut Butter Chocolate Smoothie: This protein shake tastes like a Wendy’s Frosty, but without all the sugar and additives. You can swap the peanut butter for any nut butter of your choice and add coconut milk if you like your smoothies thick. (via Lolly Jane)

14. Make Ahead Breakfast Sandwiches: Yes, you *CAN* have a breakfast sammy without losing time at a drive through. Just make a batch of these ahead of time and store them in the freezer, so they’re ready to microwave whenever you need one. (via The Pioneer Woman)

15. Crustless Mini Quiche: These mini quiche muffins have all the great egg and cheese flavor you’ve come to expect, in a convenient grab-and-go size. Make a big batch the night before, so *all* the groggy McSleepy-pants peeps in the house can start their day off right. (via Will Cook for Friends)

16. Make Ahead Breakfast Quesadilla With Cheese Spinach and White Beans: These protein-packed quesadillas offer all the tidy convenience of a Pop-Tart, but with the nutrients you need to get you through to lunchtime. They freeze so well, and heat up quickly in the microwave. (via Well Plated by Erin)

17. Peanut Butter and Banana Oatmeal Bake: If a homemade peanut butter oatmeal bar and a banana bread had a baby, it would look like this. Bake one for the whole week, then you can heat up single serving slices as needed. (via WholeYum)

18. Instant Oatmeal Jars: No need to rush around like a crazy person every morning if you prep these instant oats jars ahead for the whole week. Unlike store-bought singles that are loaded with sugar and additives, these oats are whole grain and loaded with fiber. Just add whatever dried fruits, nuts and seeds strike your fancy and you’ve got a nutrient-dense breakfast in minutes every morning. (via Simply Sissom)