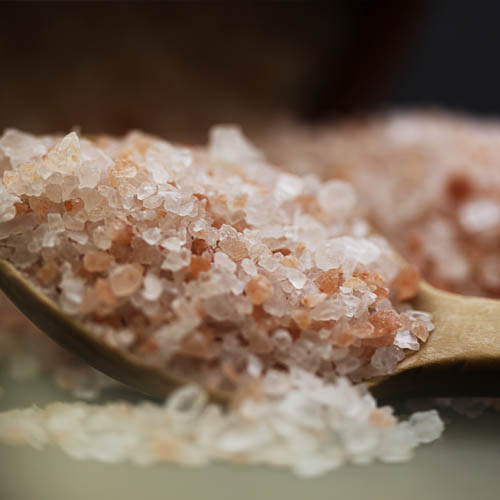 Imagine everyone sitting down for a big family feast. The best china set gently upon silk cloth, crystals brimming with fresh apple-cinnamon-ginger juice. An array of baked, steamed and sautéed vegetables decorate the table.

Suddenly Grandma reaches for the salt, startled she rears back and exclaims, “Why is the salt PINK?!”

The Himalayan mountain range stretches across Asia passing through China, Nepal, Myanmar, Pakistan, Bhutan, Afghanistan, and India. Most people associate the Himalayans with Mount Everest, the highest peak on this planet, but here is something new to think about- salt.

Once upon a time (a couple of hundreds of millions of years ago) crystallized sea salt beds, now deep within the Himalayans, were covered by lava. Aside from being kept it in a pristine environment that has been surrounded by snow and ice year round, the lava is thought to have protected the salt from modern-day pollution leading to the belief that Himalayan Pink salt is the purest salt to be found on earth. It is now hand-mined from the mountains and brought to the culinary market.

The many hues of pink1, red and white are an indication of this salt’s rich and varying mineral and energy-rich iron content.

In the same manner that vitamins and minerals are perfectly packaged in fruits and vegetables, because this salt was formed naturally the minerals within the sodium work in synergy.

(Synergy is the interaction of multiple elements in a system to produce an effect different from or greater than the sum of their individual effects.)

Iodine- Natural salts are rich in iodine, so it doesn’t need to be artificially added in.

Less sodium consumed per serving- Himalayan salt is made of the same components as table salt but since the crystal structure is larger than refined salt, and by volume- this salt therefore has LESS sodium per 1/4 t. serving- because the sea salt crystals or flakes take up less room on a teaspoon than highly refined tiny table salt grains.

Packs a hearty 80+ minerals and elements- Himalayan salts are mineral packed crystals which formed naturally within the earth made up of 85.62% sodium chloride and 14.38% other trace minerals including: sulphate, magnesium, calcium, potassium, bicarbonate, bromide, borate, strontium, and fluoride (in descending order of quantity).

Because of these minerals Himalayan pink salt can:

It is even said to support libido, reduce the signs of aging, and detoxify the body from heavy metals.

Even though pink salts come from the mountains, they are technically sea salts as well. All salt comes from a salted body of water—namely, an ocean or salt-water lake. However, Himalayan salt is said to be the purest form of sea salt.

Why Table Salt is Inferior

Commercial refined salt is not only stripped of all its minerals, besides sodium and chloride, but is also chemically cleaned, bleached and heated at unnecessary high temperatures.

In addition, it is treated with anti-caking agents which prevent salt from mixing with water in the salt container. These agents also prevent dissolving within our system leading to build up and then deposit in organs and tissue, causing severe health problems.

Finally, the iodine that is added into salt is usually synthetic which is difficult for your body to process properly. Shockingly under U.S. law, up to 2% of table salt can be additives.

The Many Uses of Pink Salt

Cooking and curing– use pre-ground salt or grinders like any other salt.

Salt Slabs– used as serving platters, the slabs will impart an enhanced salt taste and mineral content. Chilled: decorate with fruits, sushi, vegetables or cheese. Frozen: present cold desserts and even sorbets. Heated: use the slabs to sear vegetables, shrimp, fish fillets or thinly sliced beef or even to fry an egg. The dense salt blocks conduct heat beautifully with near perfect heat distribution.

Best of all, Himalayan salt is naturally anti-microbial, so clean up requires just a quick scrub or rinse.

Decoration– use the salts in containers, as décor crystals and sprinkled on food for presentation.

Bathing- throw in the tub for a detoxifying Himalayan salt bath. The replenishing nutrients stimulate circulation and soothe sore muscles. Naturally rich in 80+ nourishing and skin-replenishing minerals, bathing with pink bath salt is a healing and therapeutic experience for mind and body.

Hopefully now you will not be as shocked as Grandma when you reach for the salt shaker and find pink crystals staring back at you!