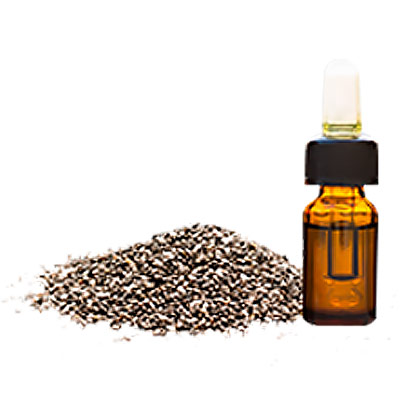 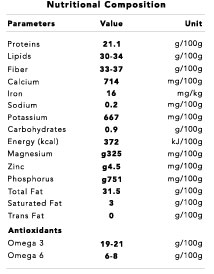 Facts
Chia, also known as Hispanic sage, is a cereal crop of Mexican and Central American origin dating from pre-Hispanic times. Given its importance to the ancient Mexicans chia was the third most important food only surpassed in popularity and consumption by the corn and beans.

Nutrients
Chia seed holds a nutritional composition: 20% vegetable protein, 25% soluble fiber and 40% oil, among other nutrients. In the case of oil, 64% of it is made up of essential fatty acids omega 3 and omega 6, both commissioned to help improve our metabolism, at the same time kept at bay our cholesterol and triglycerides and give effect cardioprotective. Also, chia seed is rich in B vitamins, phosphorus, calcium, potassium, copper, manganese and zinc, and contains very little sodium.

Preliminary Health Research
Besides having a high protein, chia, after being consumed, is easily digested and assimilated, which ensures that it is easily absorbed by the body, using their protein and other nutrients in different tissues and cells of our body. Moreover, the water and methanol which also contains give antioxidant properties useful to prevent cellular oxidation and preventing various diseases due to its anti-inflammatory effect.

As mentioned, chia is a rich source of omega 3 and omega 6 In fact, the power plant with the highest concentration of them. Thanks to its high content of soluble fiber, consuming chia seeds facilitates intestinal transit acting as a natural laxative, which confers certain properties as protector of diseases such as diverticulosis, constipation and, ultimately, cancer of the colon. As if that were not enough, chia has no gluten, so it is a food suitable for coeliacs.

Unlike other foods rich in omega 3 and 6 food, chia seeds can be stored in our pantry for a long time without this circumstance affecting its aroma, taste or nutritional value.

Advantages
Chia seeds are an important natural source of Omega-3, the most important effect is to increase good cholesterol and lower bad. It also prevents the formation of clots and plaques in the arteries, thus preventing cardiovascular disease. has no gluten, which makes it an excellent alternative for celiacs, and is highly recommended for vegetarians by completeness protein, thereby providing all essential amino acids.

Use
The byproducts of chia offer a wide range of uses: