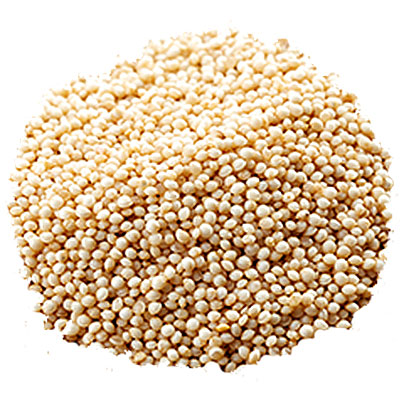 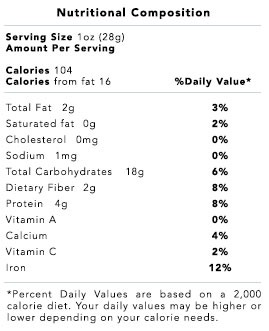 Facts
Organic amaranth grain dates back hundreds of years to the Aztecs in Mexico. It offers an unusually high quality protein and is high in fiber. Amaranth grain has a nutty flavor and can be combined with wheat flour in breads, pasta, pancakes, and other recipes.

Nutrients
One reason amaranth is emerging into the forefront among grains is because of its remarkable nutrition. It's higher in minerals, such as calcium, iron, phosphorous, and carotenoids, than most vegetables. It has truly remarkable protein content: cup for cup, 28.1 grams of protein compared to the 26.3 grams in oats and 13.1 grams in rice.

Amaranth is a great source of lysine, an important amino acid with protein content comparable to that of milk, more easily digested; neither can be said of other grains. To support this positive aspect of amaranth, it also contains primary proteins called albumin and globulins, which, in comparison with the prolamins in wheat, are more soluble and digestible.

One cup of raw amaranth contains 15 milligrams of iron, while white rice contains only 1.5 milligrams. One cup of raw amaranth also contains 18 milligrams of fiber; in comparison, white rice contains 2.4 grams. At 105% of the daily value per serving, the manganese in amaranth is off the charts, yet it contains fewer carbohydrates. Amaranth contains more than three times the amount of calcium and is also high in magnesium, phosphorus, and potassium. Amaranth contains 6 to 10% oil, predominantly unsaturated, or around 77% unsaturated fatty acids, including linoleic acid, required for optimum nutrition. Not least in this list, amaranth is the only grain with documented vitamin C content.

Preliminary Health Research
A study on amaranth reported that its seeds contain not only important nutritional properties, but also phytochemical compounds like rutin and nicotiflorin, and peptides with the ability to help lower hypertension and incidences of cancer.

Researchers suggested further investigation on the function of health-beneficial peptides in amaranth, particularly lunasin, which was previously identified in soybeans and thought to have cancer-preventing benefits, as well as lowering incidences of chronic diseases, such as inflammation, diabetes, heart disease, and stroke.

As cardiovascular disease (CVD) is linked to high blood cholesterol (hyperlipidemia), hypertension, obesity, and diabetes, scientists reported that reducing saturated fat while increasing unsaturated fatty acids can prevent CVD. Amaranth was studied in relation to these findings and found it to be potentially beneficial for CVD patients.

Test results also concluded that amaranth oil could be a functional food product for preventing and treating cardiovascular diseases.